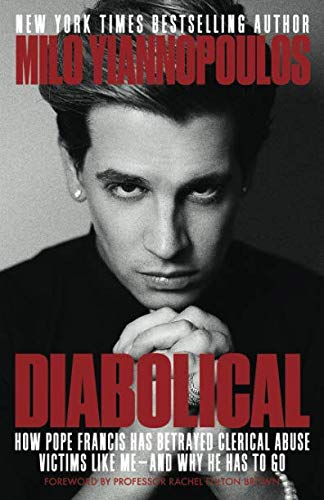 Diabolical: How Pope Francis Has Betrayed Clerical Abuse Victims Like Me—and Why He Has To Go

From the bestselling author of How To Be Poor

MILO YIANNOPOULOS HAS EXPERIENCED THE MORAL DECAY OF THE CATHOLIC CHURCH FIRST-HAND. NOW HE WANTS TO FIX IT—STARTING WITH POPE FRANCIS.Who is the real Pope Francis? And can the Church survive him? Milo Yiannopoulos traces the origins of the Church’s descent into sin and shame, pointing the finger at left-wing reformers, trendy progressive bishops, gay clergy, and ultimately, Francis himself. In DIABOLICAL, Milo Yiannopoulos levels his critical eye and legendarily caustic wit at the Catholic Church, an institution he reveres but which, under the leadership of a “Lavender Mafia” of left-wing gay bishops, has become shambolic and depraved. Yes, there really is a gay mafia. And yes, their outfits are fabulous.The Catholic Church hasn’t had a crisis like this since the Reformation. It won’t survive unless it learns how to talk to men again, sets aside transitory political nostrums like environmentalism and identity politics, and gets back to worshiping Almighty God.