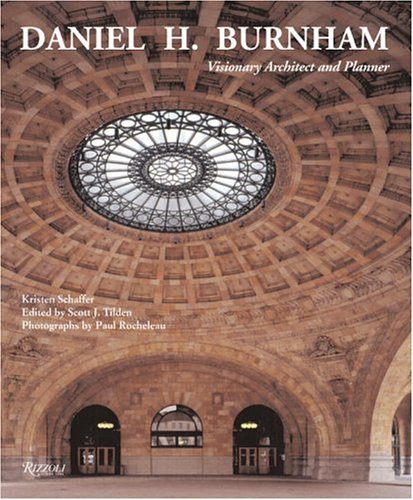 Daniel H. Burnham discovers the foundations of twentieth-century American architecture in the life and work of a man who dominated his era like few others: as an architect, city planner, businessman, philanthropist, and civic leader. Despite his importance to twentieth-century architecture, there are no monographs in print that cover such a full range of this extraordinary figure’s work.

Burnham helped create the Chicago school of architecture and built over 200 buildings in the city. With the famous Reliance Building, he heralded the glass skyscrapers of the twentieth century. His firm was one of the largest architectural firms in the world. D. H. Burnham and Company created such monumental buildings in Chicago as the famous Monadnock, Rand-McNally, and Rookery buildings, the Marshall Field Store, and the Art Institute of Chicago, as well as the Flatiron building in New York and Union Station in Washington, D.C., all of which are fully illustrated here and newly analyzed.

Aside from his work as an architect, Burnham was one of the founders of the City Beautiful movement, which grew out of an urgent turn-of-the-century need for chaotically growing American cities to develop on a more rational, planned scale. The City Beautiful movement ideas included beautifully designed Beaux-Arts buildings, increased park areas, better living conditions, and improved transportation. Included here is material on the World’s Colombian Exposition of 1893, often considered the start of the movement; the 1901 Plan for Washington, D.C., developed in conjunction with Frederick Law Olmsted and Charles McKim of McKim Mead & White; and the Chicago Plan of 1909, which was so successful that after its publication he received requests to design twenty other American cities.

This deluxe book fully explores all aspects of his work, the legacy of which lives on in the form of outstanding buildings, city plans, and cultural institutions, all still very much in use today.