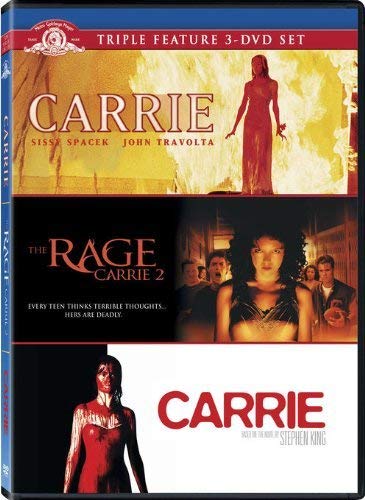 Carrie At the center of the terror is Carrie (Spacek), a tortured high-school misfit with no confidence, no friends…and no idea about the extent of her secret powers of telekinesis. But when her psychotic mother and sadistic classmates finally go too far, the once-shy teen becomes an unrestrained, vengeance-seeking powerhouse who, with the help of her “special gift,” causes all hell to break loose in a famed cinematic frenzy of blood, fire and brimstone! The Rage: Carrie 2 Rachel is a high school misfit who gets caught in the middle of a vicious prank – orchestrated by a group of over-sexed jocks – that turns deadly. Once the police bring one of the boys in for questioning, his teammates target Rachel for squealing and hatch a devious scheme to publicly humiliate her. But messing with Rachel is worse than playing with fire, for when her temper’s crossed, it triggers a powder keg of anger and unleashes special powers that can turn a fun house party into a madhouse inferno! Carrie (2002) Carrie White (Bettis) is a lonely, awkward teenage girl who just doesn’t fit in. At school, she endures her classmates’ constant ridicule, and at home she suffers endless psychological torture at the hands of her fanatically religious mother (Patricia Clarkson, Six Feet Under). But Carrie has a secret. She’s been cursed with the terrifying power of telekinesis. And when her tormentors commit an act of unforgivably cruel humiliation at the prom, they’ll soon learn a deadly lesson: If you mess with fire, you will get burned!