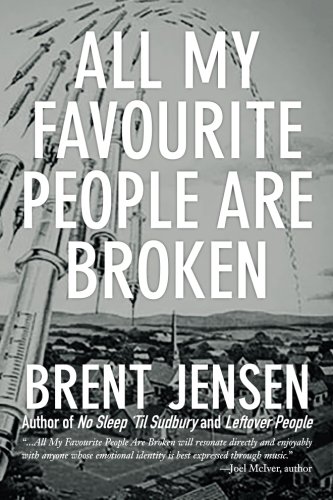 All My Favourite People Are Broken

All My Favourite People Are Broken is the third book from writer and music critic Brent Jensen, a gritty, courageous story of two music fanatics in search of the real meaning behind the emotions evoked by their favourite music. Secluded in the wilderness of the Canadian Rockies, Jensen and his childhood friend Garvey examine a collection of carefully selected songs that represent a wide range of intense emotions within them. This meditation gives rise to days of animated musical discussions, and the discourse is wildly limitless. The pair talk about how The Carpenters were creepier than Black Sabbath. They ruminate on why it was okay to listen to Billy Squier’s “The Stroke” but not to Rick James’ “Super Freak” as preteens in 1981. The similarities between Michael Jackson and metal guitarist Zakk Wylde are considered. The deification of dead rock stars gets discussed. So does how likening Ryan Adams to Bryan Adams ended in ejection from a Ryan Adams concert. They suspected Lana Del Ray’s “West Coast” was a secret love letter to Axl Rose. Magic mushrooms are ingested at one point. No topic is off-limits, including their experiences with predatory cross-eyed groupies at rehearsal studios. All this while music spanning virtually every genre and generation blares nonstop from an iPod sound dock. Above all, the two have sequestered themselves out in the middle of nowhere to answer the hard questions surrounding the feelings elicited by the music they love. As they proceed, the questions get a lot harder. And more personal than they expected.